Do something: KFC and cause marketing.

Disclaimer: KFC is a client of Draftfcb. I do not currently work on KFC, nor do I have any insider information about the Pink Bucket (or any other) campaign. These are my opinions only.

If a tree falls in the forest and you don't particularly support the tree or the way in which it was taken down, is the wood useless? Should you throw it away? Or should you use it to build something anyway?

That was ridiculous. My apologies.

On that vein, Seth Godin's blog recently offered up a little something that made me think.

"You can spend your marketing money in more ways than ever, live in more places while still working electronically, contact different people, launch different initiatives, hire different freelancers... You can post your ideas in dozens of ways, interact with millions of people, launch any sort of product or service without a permit or factory.

But no matter what, don't do nothing."

I've been conducting a bit of personal research lately about the ethics of cause marketing. Nothing official, just kind of... listening. I've noticed that there is a lot, a LOT of discussion around whether cause marketing is abhorrent. Yes, cause marketing happens when brands align with good causes and probably aim to boost their brand metrics in the process. Yes, that smells like exploitation. What I'm wondering is, in the case of a cause, does it matter? Isn't doing something better than doing nothing?

There's a lot of dissent around the KFC Pink Bucket campaign for Susan G. Komen for the Cure. You buy the pink bucket of chicken at KFC, and fifty cents on your purchase goes to Susan G. Komen for the cure. On Twitter, in the blogosphere, kind of all over, people are really pissed about this. They're furious that a brand that can be linked to obesity, which increases one's chances of contracting cancer, would purport to care about an anti-cancer message. And, they're furious with Komen for agreeing to align with it.

What exactly are the dissenters condemning? There is nothing illegal going on here. People are purchasing chicken of their own free will, and part of the proceeds are going to something better.

Sure, KFC sells a whole bunch of really fattening awful stuff. But, they wouldn't sell it if we weren't buying it. And yes, people could skip the pink bucket and donate their entire chicken dinner fund to cancer research, circumventing the entire program. But would we? We don't seem to be doing so currently. 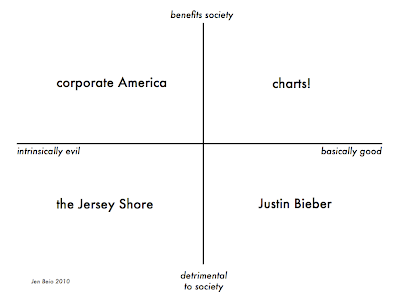 Consider this chart. KFC, I'd say, sits squarely in the 'evil, but beneficial to society' quadrant with the rest of corporate America. Sure, corporate America is evil. It's malicious, it's vicious, and it looks out for itself above all others. But it also creates jobs for Americans and provides a means for us to sustain ourselves as a country, at least for the time being. So, beneficial to society. The vast majority of industry, the real moneymakers out there, sit somewhere in this quadrant. Should we force them to stay there?

Does being pegged in an evil quadrant disallow KFC from being able to dabble in the good? As far as I know, the money they donate is worth just as much regardless of whether they are hoping to boost brand favorability ratings in the process. No, I would never say that KFC is an agent for goodwill. That said, should Komen have turned them down? Should KFC be excused to do nothing?

Nay-sayers, I urge you to take your judgy eyes off the means and focus on the end.

Per Daily Finance, if KFC donates the $8.5 million that they've hinted at, that would be the largest single donation in the history of the Komen foundation. My boobs and I agree that if chicken money finds a cure for breast cancer, we are okay with that. I am also okay with chicken money saving my mom's life, my grandmother's lives, my friends' lives and the lives of every woman (and man!) that has ever and will ever be threatened by breast cancer. My boobs and I will take your chicken money, KFC. Thanks for offering.

All of this says something really hypocritical about society. The American dream dictates we be doers, yet we seem to get to pick and choose who's allowed to do. If we condemn cause marketing because it's not pure, where do we draw the line in terms of trying to do good? Are hybrid cars okay? NASA? Livestrong? Hybrid cars aren't going to save the planet, NASA rockets burn a serious amount of fossil fuels, and some people say Lance Armstrong is kind of a jerk. None of these entities are free of flaws. But we see merit in working to do something, and we excuse the flaws of these organizations to allow them to do so. There is no merit in sitting on your ass, and yet this is what society is prescribing for brands rather than allowing them to leave to play in the cause marketing arena.

I guess I just don't understand what is so awful about trying to do something, regardless of your flaws.

Doing something is better than doing nothing.

To the people who argue against cause marketing: there is no pleasing you, so I'm not going to try. But I will encourage you to take some initiative to change your quadrant, like our evil friends at KFC. The poorly-felled wood in the forest deserves a shot at construction, don't you think?
Posted by lilmissjen at 8:53 AM