I've been a New Yorker for one whole week now. Pretty excellent, yes? I've been crazy busy trying to sort out a new apartment, get rolling with my new job, test-ride my new commuter bike-cycle and figure out where I'm going and how to get there. But, now that I'm established and cool as a cucumber, I thought I'd throw out a few things that I've found noteworthy in my first week in the Big Apple.

First and foremost, there are ice cream trucks everywhere here, like beautiful mirages in the waves of summer heat. It's amazing. I am developing a srs ice cream habit - not good. OM NOM NOM sprinkles. I borrowed this photo from the internet.
Secondly, there are a TON of options everywhere when it comes to craft beer - awesome. I found RedBridge (gluten-free!) this weekend at a tiny convenience store, right next to the Miller Lites. My friends confirmed that it is awful, but at least it's readily accessible. It's super cool to be able to find cider in non-specialty stores, and even cooler to find g-free beer. High five, NY.

Third, oy. If I thought I was bad with directions in Chicago, I'm seriously awful with them here. I don't think the city planners were trying to help me, either. It took most, if not all of week one to determine that 6th Ave, Broadway, and Ave of the Americas are all the same street, at least down here in Herald Square.

Funny joke. Also ran into some issues with trains not running on weekends - thank goodness the cabs here are credit-card equipped, even if they don't seem to like to take me to DUMBO.

My fourth and final note relates to the incredible awesomeness that is the Brooklyn Bridge. A slow and painful way to die on a bike on weekends, but on an early morning run, it's like this incredible glorious gateway to all things New York City. This photograph, borrowed from Flickr, is about right. The apartment is just a few blocks from the entrance to the Brooklyn Bridge pedway path, so lucky me. Totally amazing, totally note-worthy.

I'm so stoked to have landed, albeit still waiting for my moving truck to arrive. My friend Ian wrote a lovely post about moving to NYC as a young pup - "it's like swinging with a doughnut. A beautiful and complicated city." I love it. I'm hoping to expand my bloggery to include thoughts, recommendations, and analyses of the city as I get to know her a little better.

I've been truly awful about taking and posting pictures, but I will try to remember to take more once the apartment is set up and I'm feeling less hectic about everything. Here's a view of lower Manhattan from our rooftop, in the meantime. 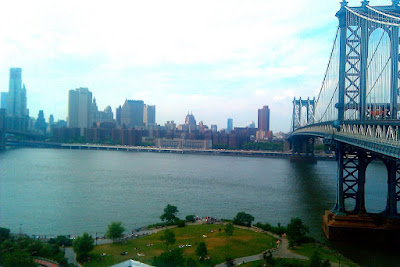 And, since I'm in hipster territory now, the tilt-shifted version: (tech via @clayparkerjones) 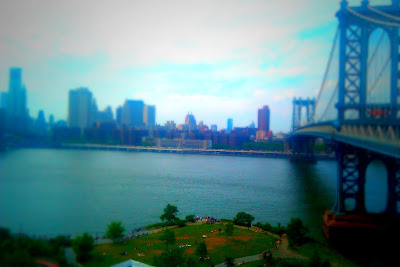 Running and writing in NYC.

I'm  a runner and a writer. I like to think that I am, anyway. I've always thought these two descriptors to be independent of one another. But, perhaps not.

I've moved running to the back burner as of late, exhausted by weeks of trying to tie up loose ends on one life and organize/coordinate/jump-start another. I didn't really write anything during that time either, save for this post announcing my transition, for presumably the same reasons - exhaustion, stress, lack of free time. Despite my prior conclusion about mental and physical training being two distinct faculties, I'm starting to hypothesize that it was the lack of running that lead to lack of writing. It makes sense - there is no better facilitator for writing than a long, steady run, where I am my own captive audience. No alone time in my head, no space to ponder the universe, no place to organize my thoughts. Which leads me to:

Side note: I'm quite sure that making time for running (and therefore writing) would have eased some of the moving and job-shifting stress. Too late for that now, I suppose.

Now that I'm comfortably set up in my new DUMBO digs, I've jumped back on the pavement-pounding bandwagon with a series of short jaunts on the Brooklyn and Manhattan bridges. The first was godawful, fueled by 90-degree heat and swarms of tourists (not to mention I hadn't been training for a few weeks, fail). The second was a cool, tourist-free early morning run, and was a little, if not a lot easier. Since my iPod armband has yet to be unpacked, it was a very quiet run, interrupted only by drumming heartbeat, my own cadence and early-morning city sounds. And wouldn't you know it, I'm writing. And hypothesizing. Saints be praised!

Moral: figure out what it is that allows you time to think, and prioritize it. This city is amazing, and I'm so excited to be running and writing here.
Posted by lilmissjen at 1:39 PM 4 comments: