Growing up in Michigan, you could bet your lunch money that no matter how gorgeous the weather was in autumn, it would be snowing by Halloween. I'm so glad our recent visitors got in and out before the sky fell, because despite our recent crisply-sunny days, it is absolutely pouring snow in Brooklyn right now.

After a quick errands-run to SoHo earlier, snow hitting our umbrella and eyelashes in heavy pattering chunks, we settled in all day with magazines, piles of blankets and cups of tea. I made creamy white beans with bacon and a big pot of kale in homemade stock for lunch and we feasted, read and cozied all day long.

There's no place I love better than our snug apartment when the city goes all snow-globe on us. I should be annoyed that we only got about two weeks of fall before winter stomped in, but I'm just not. It's all I can do not to get my Christmas decorations out of the closet. 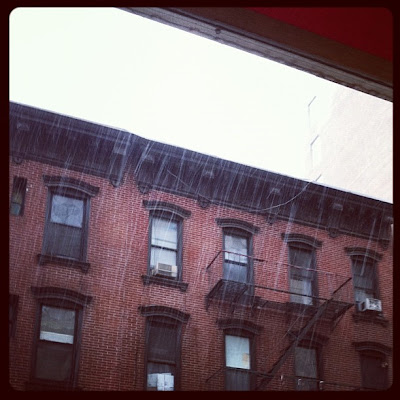 Sir is making toddies and they smell insane. I don't even mind feeling sick when the weather is this grand.
Posted by lilmissjen at 5:43 PM 4 comments:

My best friend moved to Brooklyn two weeks ago. It's about time - we've only been trying to convince each other to live in the same location since we graduated college. No harm done; we both got all our wandering taken care of (hers perhaps quite a bit more adventurous than mine) and now we can pick up where we left off, which is somewhere between frequenting dive bars and drawing with crayons. All of the above are now to be done in Brooklyn, which seems to suit us both very nicely.

Saturday morning(ish), Sir and I met up with Christy and her Sir for a stroll and troll around the Brooklyn Flea. Due to large numbers of hipsters and the brilliant sun, mixed with dry late-summer heat, we only lasted a hot minute before heading to a non-garden biergarten called Der Schwarze Kölner in Fort Greene. They did have a few nicely shaded outdoor tables, which served our purposes in lieu of an actual garden. This place served Very Large Beers and a number of other gluten-filled substances. We applauded them on their German-ness, although I was a bit disappointed in their cider selection (apfelwein, while sounding very much like a win, ended up tasting a bit like pickle juice and peanuts). 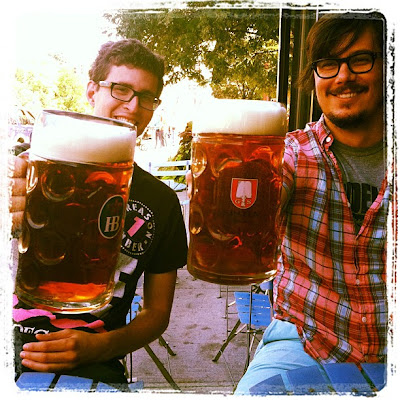 The Sirs and their large-format beverages. They're so cute. 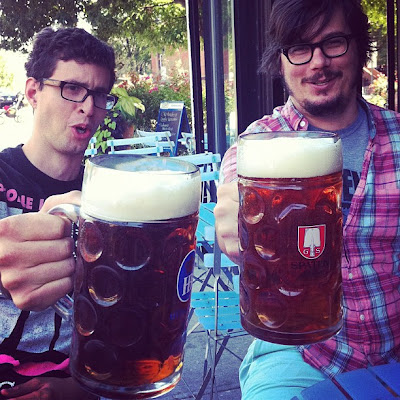 Christy's version, which caught them mid-trololo. 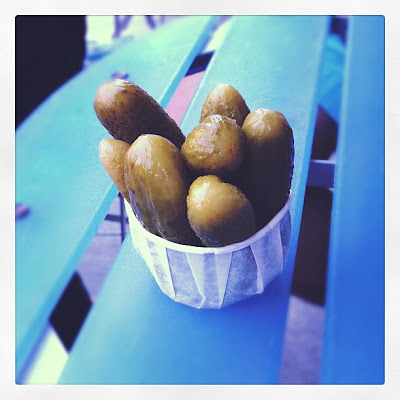 Pickles: one of the only non-gluten items on the menu and a potential contributor to the apfelwein.

Sunday evening we hosted an introductory round of Empire Builder, a rail-building continent domination board game which involves drawing on the game board with crayons. Despite the round being introductory, we ended up playing for 3+ hours and had to call time at midnight, with no player being near victory. The board is being guarded by our head of security (Ian) until such time occurs that we can reconvene to finish out the round (Wednesday).  It appears Christy and her Sir are natural railroad entrepreneurs, therefore we have stopped giving them strategy hints and tips and will for sure be building out our rail lines in secret prior to Wednesday. 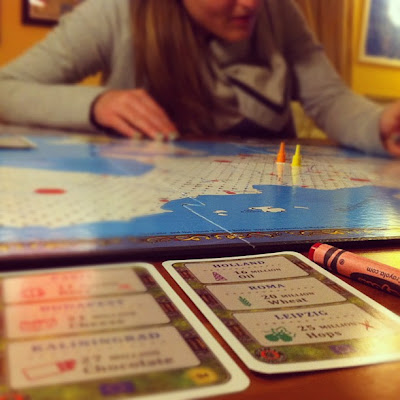 Photo cred: Christy. And JK, we won't touch anything.

New York is really starting to feel more and more like home.
Posted by lilmissjen at 4:54 PM 4 comments: