Fan love is the best love. 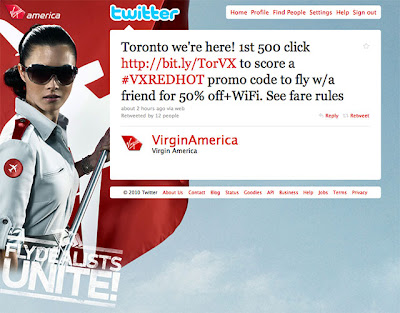 I caught an article today on Mashable highlighting Virgin America's decision to add another airport to their exclusive list of hubs. I found it to be overwhelmingly awesome that they chose to announce this major addition via Twitter, as opposed to going a mainstream news route. Not surprising, seeing as Virgin has always been pretty on top of their social media game, but cool nonetheless. Virgin's fans are important to them, and their engagement matters most.

Oddly enough, the next article in my reader was also about handing the power of the brand over to the fans. Lady Gaga (a total nut-job and completely brilliant, IMHO) is currently holding reign as purveyor of fan loyalty in the music business. She may be really odd, but her fans worship her, perhaps literally.

The article touches on what she has done as a brand to respect the fan relationship and build a powerhouse of Gaga-crazed fans, from calling her fanbase by name ("Little Monsters") to allowing them to film and spread her content instead of relying on professional photographers and videographers.

As a purveyor of traditional media, it seems sacrilegious, but if you can respect your consumers by speaking to them where they engage with you instead of screaming from soapboxes, I say gopher it. You're in the business of cultivating your fanbase - it matters what they think of you. To recognize that the fan conversation is The Conversation is pretty cool.

A long, long time ago, I found myself flipping through this presentation that Bud put together regarding fandom. Bud has covered fandom up, down, and sideways, but this presentation really kind of captures the importance of the fan relationship in a simple, concise nutshell. Please note that on slide 26, he gave a nod to Virgin, who in 2008 was already implementing awesome internet-social-fan stuff IN THE AIR. Get your act together, brands who only need to be concerned with the ground.

Fans are important. And now in 2010, brands and marketers seem to be starting to get the hang of that, which is cool.

The problem with the rising importance of fandom is that we seem to still be having issues wrapping our budget-focused heads around how to measure it. I suppose it makes sense; if we're going to be assigning costs to fan acquisition, you'd like to also be able to assign a value. This is especially true in environments like Facebook, where being a fan requires almost no effort and does not indicate any follow-up whatsoever. Clay penned this bit of brilliance in regards to some holes in a recently-born impression-based fan-value equation, and I have to agree with him. A true fan has love for your brand. Or, as Bud said, a fan will fight for your survival. An impression does not a fan make. And therefore, crafting the fan-value equation seems to get rather slippery.

As a media planner and Guardian of Budgets, my questions are thus: without a sturdy value equation, will positive case studies ever be enough to convince wary, non-savvy brands to throw caution to the wind and put significant budgets behind supporting their fans? Can a fan economy survive where budgets are bleeding and big-name advertisers are clinging to old advertising strategy? Or will the fan economy prosper, and leave the old-timey marketers in the dust?

I have no idea. The way of the future doesn't always disregard the past. I would love to hear your thoughts, if you have them.

Thanks, Bud and Clay, for always producing thought-provoking content. It's safe to say you make me a little smarter. I'm happy to be fans of you both.
Posted by lilmissjen at 8:14 PM