Moving is one of those things that forces you to learn something about yourself. In kind of a gentle water-boarding sort of way.

Maybe it's because you're in the physical act of unraveling and sorting through the contents of your life and you can't help but uncover something in the process. Or maybe it's because the stress of the thing is enough to power down your once spongy brain matter until it becomes what feels like a dense cube of stupidity and sob-triggers, and it is there that you learn what really makes you tick. Either way, there comes a time in all moves when some sort of monumental learning occurs.

I, for example, have discovered what it is that makes a house a home.

This is not something I sorted out over the course of the past few weeks. I did not learn it while apartment hunting or while starting to pack. Instead, it's something that hit me in the face at 11pm last night, after hurriedly removing everything from the walls when I found out our unit inspection was getting moved from Monday to Friday. Once I had pulled myself together enough (damn you, brain cube) to complete the task, I set down my power drill and putty and stared at the room in shock. Our home was gone.

It's not love, family, books, a cat, a KitchenAid stand mixer or a fluffy duvet. It's drapes.

Our sweet bungalow was as cold and barren as a dorm room. All the heartbreak and attachment and longing and pain I had felt at leaving those 800 square feet went out the window with the fumes from the spackle.

It's the same space, I know. It just doesn't feel like it's ours anymore. 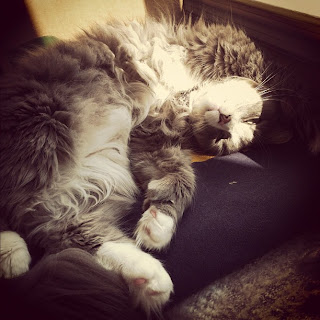 I haven't written anything in a while. Generally, this indicates that I have come upon one of two situations: either nothing is happening or everything is happening. This is a case of the latter.

Apparently, I only write in medium-happening situations.

Since starting a new job wasn't stressful enough, we decided to move a few months early so that these events could coincide. It's good to do these things at once, I suppose. If you're going to overhaul your life, might as well just rip it all off at once, like a band-aid. No point in spreading out the stress.

That's how I ended up sitting alone in our now-barren living room, worrying silently over email on my new assignments while surrounded by a veritable fortress of dust bunnies and cardboard boxes. Sir, very conveniently, has just taken off on a week-long business trip, leaving a great deal of the packing to Ian and me. We are trying our hardest not to fault him for this, which has been easy thus far since we mostly just miss him.

Ian doesn't understand what's going on, but all the activity around the place has him very concerned. Ian, despite our best efforts to toughen him up, does not seem to be made of hearty stock. He spent so much time supervising, skittering around, hiding everywhere and stress-vomiting yesterday that he's been passed out nearly all day today. We've tried to explain to him that we're not leaving him, that all the stuff will be okay and how much windowsill space there will be in the new place, but I'm not sure he's gotten the memo. It's very cute to watch him sleep in the sun and yet I can't help but feel badly for putting him through all of this.

But then I remember about the homeless kitties shivering on the street and I tell myself to get a grip.