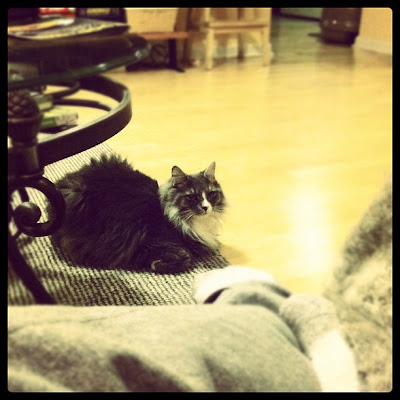 I was having a conversation today with Amanda Blair about the myriad reasons that I, at the ripe old age of 26, have become a homebody. I tick off my list of excuses for not partaking in barsy evenings, explain that going out just doesn't seem worth it to me anymore. I'm not opposed to it, but it seems going out to dinner has become more of my cup of tea.

It probably always has been, but that concept takes on a solid form now that I'm part of a team. All the little annoyances - the too-loud music, the crowds of people, the over-priced everything, the coat situation, the hangovers - had once seemed insignificant under the veil of potential. Now that I know that my potential is waiting at home for me in a darling apartment in Brooklyn, the cons take on a glaring sharp focus and the whole thing seems insignificant in comparison to what's going on in my living room.

She disagrees with me, of course. But she does a much better job of listening than I ever could, letting me make my points and acknowledging my perspective before educating me on all the wonderful things I'm missing out on by hiding away in Brooklyn every weekend. To hear her tell it, she loves getting ready, finding the perfect bar, laughing it up, dancing, having stories to tell. And while I'm sure she does love all of those things, I'm certain that the reality of the situation is that she's just so much braver than me.

My darling Amanda Blair. That girl, I swear. She has so much courage. She is a spitfire and a spark, sweet and genuine and fiercely loyal. She stomps all over this marvelous city in 5-inch heels and would probably be blithely unaware if it attempted to cut her down. People say New York eats you alive; Amanda invites it to her birthday party.

And she writes about it, the whole damn thing.

I think she thinks we're cut of the same cloth, us twenty-something NYC transplants. But there's an enormous difference between us that's made very apparent by our transplantation motives: she was chasing a dream, and I was chasing a BOY.

To give myself some credit, there is definitely a good amount of gutsiness involved in taking a chance on another human being, and even more so when that chance involves uprooting your life and starting over somewhere else. It is no easy thing to wager your lifestyle on a relationship. And now that I think of it, the overwhelming relief at realizing that everything was going to be better than perfect was probably enough to keep me on the couch for a lifetime or two.

Even so, I can't imagine going through that alone. I'm not certain that I could, but she sure did. If it was traumatizing in the slightest, I certainly can't tell.

Some people find everything in their homes, and some create them where they stand. Different types of courage, I guess, but I'll always be jealous of people who beam overt fearlessness from their very toenails on any given Tuesday. That girl could make friends with a paper bag.
Posted by lilmissjen at 10:32 PM