FRIDAY
After leaving work, the severe weather anticipation started to build. I hurried to the store, anxious to get supplies before businesses starting shutting down for the weekend.

Our block has two grocery establishments: Foragers, a high-end grocer and charcuterie, and Peas 'N' Pickles, a more standard-fare bodega. I giggled as I watched people streaming out of Foragers and into waiting Lincoln towncars, arms heavy with cases of Perrier. I hoped their brown paper bags carried delicate vials of saffron and truffle butter, as well.

The scene was fairly calm inside Peas 'N' Pickles, if a bit more crowded than usual. In fact, for the first time in New York's history, everyone seemed content to be standing in line. I took careful note of the varying levels of preparation. It appeared that the females of the species had carts full of bottle water, batteries, dried foods, bandages, candles and toilet paper, whereas the gentlemen each had one six-pack of beer (one?). The gent right in front of me, in fact, waited twenty-five minutes in line to purchase a box of Marlboro Lights and a jar of Skippy. 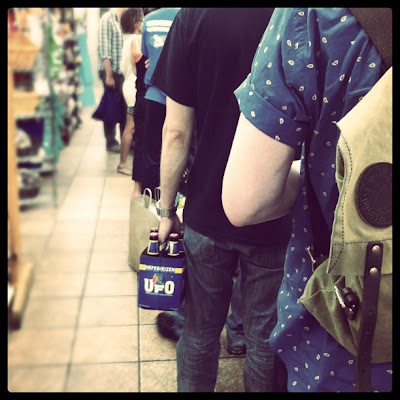 Amazing. That's Skippy there, with the army-green backpack.

I don't know if it was the reassurance of preparedness or the weight of the week, but I slept like a baby that night.

SATURDAY
We woke up Saturday morning to a blanket of humidity and an overcast sky. It was decided that our friend Andrew and his cat would seek refuge at our place in Brooklyn, as his Battery Park apartment falls well within the evacuation zone.

Note: Seated in DUMBO, we are, technically, less than one block outside of the evacuation zone. However, I'm pretty sure hurricanes know about and respect blocks and zones, so we should be good.

We puttered about; me, cleaning and laundering and readying ourselves as best I could, and Sir downloading as many natural-disaster related movies as he could think of.

Andrew arrived with his cat. I made muffins.

We cracked jokes at the bad movies and watched the cats interact, tentative (hilarity). 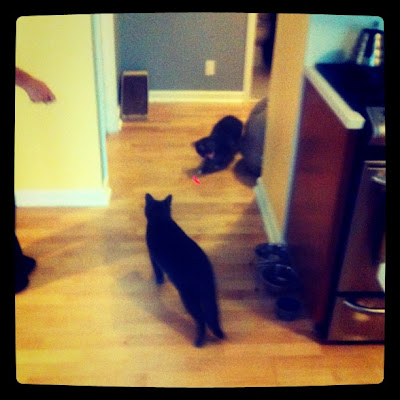 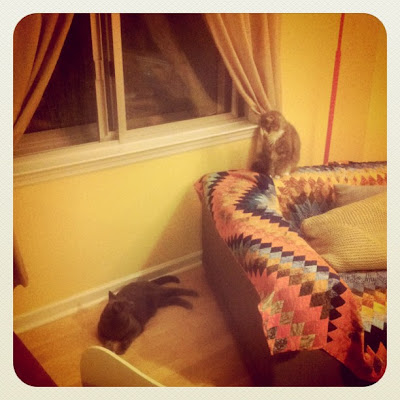 The day kind of lingered on, restless and drizzly at best.

10:03 pm: the first bolt of lightning, the first rumble of thunder.

It's supposed to hit overnight. I think my main concern is that the windows break (all of them, maybe all at once), and a shard of glass flies through the room to stab me or Sir (or Andrew) through the neck. Then what?

Note: don't worry, Mom! I'm being funny. We'll go in the bathroom or (windowless) hallway if the winds get bad.

I can't be the only person crossing my fingers that the subways aren't back up and running in time for work on Monday.
Posted by lilmissjen at 10:22 PM