A few thoughts about the retreat.

This post is about my experiences surrounding the yearly retreat put on by the fine folks at Yoga to the People. All thoughts and opinions are un-commissioned and my very own. 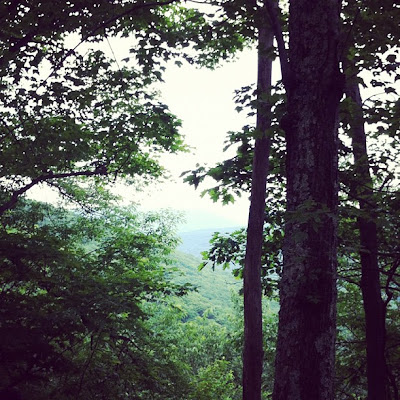 If someone were to write for you a short paragraph on me and the various things I'm likely to do, it would maybe say, 'enjoys a House Hunters marathon,' 'still carries her TI83+ calculator,' or, 'will argue for the merits of Kristen Stewart's acting career.' The phrase 'social anxiety' might be involved. But absolutely nowhere in that bio would be written the phrase, 'tends to sign up for silent meditative yoga retreats in upstate New York, in the company of hordes of people she has never met who are probably super amazing at yoga.'

It might mention that I enjoy an occasional yoga class from a polite, midwestern point of view, but that would be the most you'd hear of it.

There I was, anyhow, downward-dogging and hiking and master cleansing and crawling into some lunatic's sweat lodge in the middle of freaking nowhere, struggling to erase the nagging thought that I had no way to contact Sir, who had been in the ER with a bad bout of food poisoning just a few days earlier. And, of course, all the while trying to remember to breathe with purpose and keep my shoulders down in warrior two and not speak or think about pizza and write in my journal and keep an open mind and enjoy the nature and meditate and receive and relax, for pete's sake.

I had signed up for the retreat months ago on a total whim in the darkest depths of my aforementioned difficulties, grasping desperately at the opportunity for a few days of silence. It wasn't even with my yoga studio; I just happened upon it on the internet while looking for a place to practice near my office, should The Darkness ever end. I saw the words "meditative yoga getaway" scrawled in Papyrus and plunked down four hundred bucks without a second thought. The retreat crept up on me unawares as I continued to dig my way out of The Darkness, still somewhat submerged as the final pre-retreat days burned away. Thankfully, my best friend stepped in and signed up to go with me before the weight of my action could really have any major effect. This happened roughly two days prior to the retreat, at which point I had still yet to contemplate the potential outcome of my hasty actions, such as, 'this will involve riding in a van for three hours with people you've never met.'

Again, not my cup of tea.

But I went, because I needed to try to relax. I went with Christy at my side and my mat on my back. I turned off my cell phone. I wrote in a notebook. I wrapped myself in LuluLemon, the most magical stuff on this good earth. I did all the poses, I hiked and (against my better judgement) I sweat and I tried, I really tried to be silent and breathe and relax and quiet my mind and just be.

But I just could not. It really just wasn't my weekend.

I wasn't even a wreck, really, I was just my normal anxiety-ridden self, only hours from home and clad in spandex. Where was my transformation? I wanted immediacy, I wanted to feel like a different person. I wanted to be magically transformed into a blissed-out yogi without a care in the world, spouting peace and harmony while twisted into a delicate pretzel. I wanted to be sobbing at the enormity of the effect the weekend had on me and my psyche. But I just felt like me, with slightly stronger arms. I felt a little silly even, having run away to try to find myself and finding, instead, that 'myself' is exactly who I was upon my departure. My practical brain puffed up like a peacock, spitting salt into the wounds of my broken-down, embarrassed spirituality.

Upon my return home, Sir pressed me for details and I crumpled as I admitted that I must have done it wrong. He laughed kindly at my distress, reassuring me that couldn't be true. It was about timing, he was sure of it. If only the retreat could have been next weekend, once The Darkness was over and things were easier. Next year it would be better. Next year, I agreed. Next year I would be better.

Timing is a bitch.

As I plowed through the early days of the week, The Darkness suddenly lifted, earlier than expected, a jarring and immediate change. I had known it was coming, but still it left me incredulous, feeling about ten pounds lighter. I took it in for a few delicious days, relishing in my newfound freedom, doing not much of anything at all, lest it should return. On day three, I accepted that I really and truly was able to do whatever I wanted, so I took a yoga class, finding myself roughly a thousand times more joyful than I had been in months. My downward-facing dog was triumphant! Palms planted, energy flowing through all ten fingers. Strong arms, strong back; my heels grazing the mat and my triumphant ass grazing the sky. I flowed and balanced and posed through the asanas like a warrior queen, a person I hadn't seen in months. New York gussied herself up for the occasion, busting out the major sunshine and the most succulent of warm breezes to follow me around as I bounced along, head up, light in my feet. I barely recognized myself. Everything I wanted from the retreat was suddenly accessible, and not tucked away in a mountain paradise, but right here in New York, in my own house and my own heart. And like that, my four hundred dollars started to feel like a very weighty investment, indeed, a deposit straight into the bank of my self-preservation.

My fervent, fevered thanks go out to the folks of Yoga to the People for helping me along my path, for cracking open my ribcage to receive joy at my own pace.

Retreat can be so very valuable, a time for healing, even if you find yourself unable to recognize the process. Transformation is patience, something I've never had much of; transformation is self-love.

Sometimes you have to give it a minute to take.
Posted by lilmissjen at 7:15 AM