I suppose since January's almost over I could write a little something about the new year and resolutions. And I suppose since I'm a 20-something female with a pulse that my resolution would have something to do with working out, eating healthy, and the like.

Well. It does. But it's also about NUDITY. Yes.

This past October, I ran the Chicago marathon. Some people (actually, I think most people) run marathons and find themselves addicted to running, racing, marathons. I, for whatever reason, was not one of these people. I stopped at the finish line and haven't run a step since. But alas, food is a hobby of mine and this city is chock-full of it, and not the low-fat version. So, in November, I joined a gym.

It was at the gym, not in the spin studio, but in the locker room that I learned an important lesson about social mores, and my resolution was born. 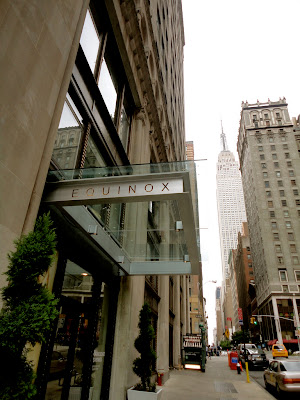 I did not take this photo. Courtesy of the internet.
Equinox, king of gyms! My first gym, ever. Never spent a whole lot of time in a gym before - as a runner I never really needed to, and could never stomach the thought of paying to work out. It seemed elitist and wrong. Plus, I'm cheap.

But lo and behold, and who would have thought, I love the gym. From the glittery front desk full of smiley people to the chilled eucalyptus towels next to rows upon rows of sparkling equipment, it's like a trip to the spa. The sweaty, smelly and very naked spa.

For it's in a gym locker room, and no-where else in the modern American social sphere, that it's okay, nay, encouraged! to be naked in public.

It's here in the locker room, at the very center of all self-consciousness at the temple of the insecure, that nudity reigns. Somehow, I had absolutely no idea that this was the case. Also, it's some sort of unwritten law. I was expected to know, despite the fact that it wasn't pointed out to me in my tour - "and here is where people are naked!" - and nudity is a punishable offense elsewhere in public. And yet there it is.

I'm embarrassed to admit that it makes me uncomfortable. Apparently I'm more prude than I thought - damn you, America, and your stodgy, stuffy ways! I cower in the corner as I change into my workout gear at lightening speed, like a frightened child who's never seen other naked humans en masse before. Is that who I am?

Apparently so. And as weird as it still seems to me, I envy their unabashed freedom.

So, resolutions. On top of the fact that Sir and I are revamping our diets, doing an (almost) entirely alcohol-free January, and hitting the gym like crazy in an effort to lose my NYC fifteen, I resolve to go naked in 2011.

I do mean that metaphorically - strip down to my core, be myself first, foremost and always, etcetera, blah blah blah. I also mean it literally. It is my goal that at the end of 2011, I am able to bare it all in the locker room without batting an eyelash. I don't know how I went twenty-five years without knowing that there was a place in this country where public nudity was accepted, but now that I know, I will not be left behind.

Health, wealth and nudity in the new year, and all awkwardness be damned.
Posted by lilmissjen at 4:15 PM